Yesterday I took the opportunity to make a trip up to the Arctic Circle.  It seemed fairly obvious that it needed to be done when I do in fact use arctic in my name.  You see, while we are considered arctic warriors up here in Alaska, we actually do not work in an arctic environment in anything but description.  We are technically sub-arctic as we fall under 200 miles short of the Arctic Circle at our closest point.  Though, particularly the area in which I work, it gets colder on average than the actual North Pole.  Fun Alaska trivia for you.    Anyways, I can now say I have ventured above the Arctic Circle.

This may not seem like a huge endeavor for some of the people up here.  If you have ever watched Ice Road Truckers, then you are aware that they go well beyond the Arctic Circle on a daily basis.  In fact, some of the best caribou hunting in Alaska is another four plus hours beyond the circle (as I have been told), and people regularly make trips up there during the fall to hunt the 40 mile herd.  What makes this trip so special, aside from the fact that I haven’t done it?  The lack of logistical support that is available during the winter months, particularly during the holiday season, for one.  What maps and reports had promised to be fuel points and service areas turned into snow covered ghost towns during this time.  I would dare say they all flew south for the winter.  Who could blame them?  Two hours from the nearest town?  Food would be scarce and expensive to have brought out there.  If things went south with communications (there’s no cell service that far up either) then you were screwed if something happened to you.  While I felt lied to by the information I received, I simply can not be mad about the fact that people didn’t hang around to man service stations during the holidays. 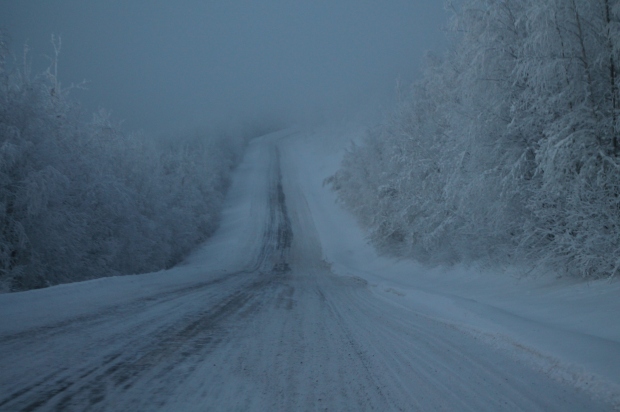 The next factor that made the timing so treacherous were the road conditions.  The Dalton Highway is hilly, curvy bastard.  During winter it is that, with a bunch of snow and ice on top of it.  Guessing how much you need to brake on a downhill to ensure you slow down while refraining from spinning out of control is butt puckering to say the least.  I would compare it to a roller coaster that you’re not sure if they tightened all the bolts on.  You may make the turn at the bottom.  You may just shoot straight off the side.  Fun times!

All and all, the drive was beautiful though.  I have seen a lot of things in my life.  I have never seen anything like this before.  And the pictures I have don’t even do the landscape justice. 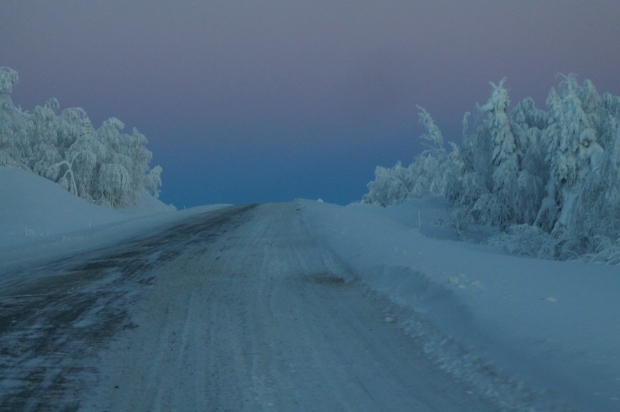 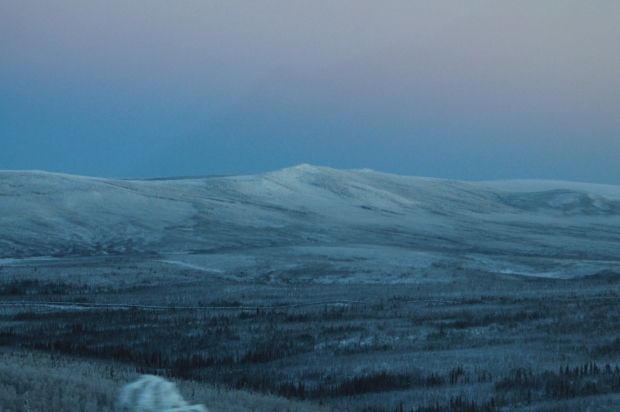 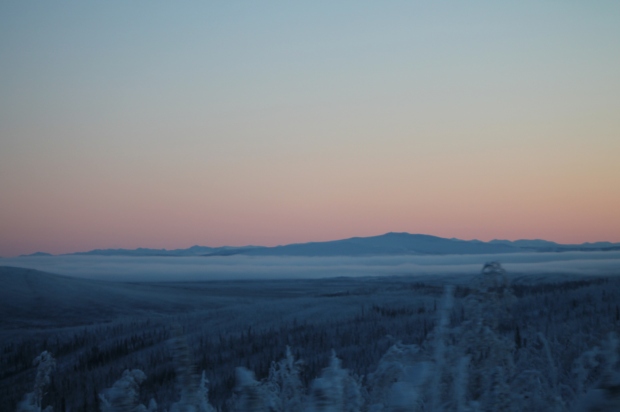 But after about four hours of driving, we finally made it up to the Arctic Circle! 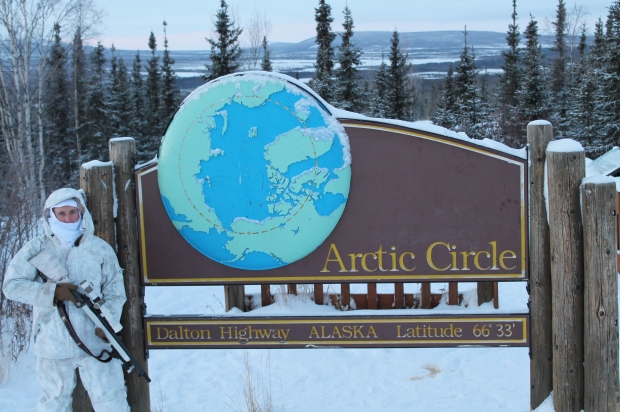 Where of course I had to do a little showing off with my white suit.  But hey, might as well get the cool guy picture in while there’s the opportunity.  That look in my eye is “hurry up and take the picture, we’re burning gas!”  As I mentioned earlier, service points were all closed.  After we concluded the picture taking and back of the board name marking, we piled back in the vehicle and had a choice to make.  After pouring in our fuel can reserve, which in future endeavors will be doubled, we were still only left with just below 2/3 of a tank.  We could push another 50-60 miles north to a village called Coldfoot, which may or may not have been closed down for the holidays like the other places, or try and push back, conserve gas on RPM’s and try to make it to the outskirts of Fox where we would at least get signal to call someone for help.  It was a gamble either way.  We chose to push back. 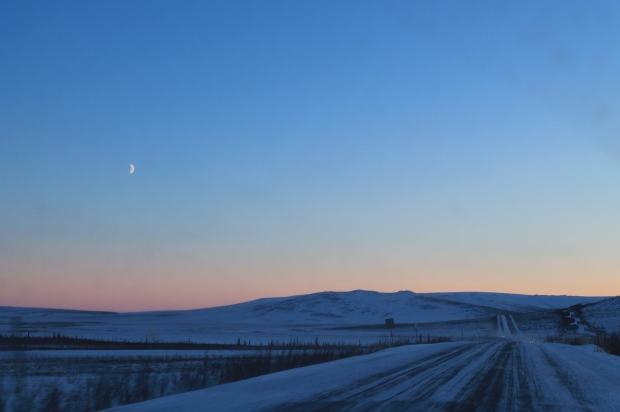 Our option seemed the soundest of the two.  Places we had been told were open already, were not.  Moving further away was going to add another two hours on to the trip and push us past the expected time to return and spark unnecessary worry from wives.   Plus the likely hood of a passerby on the highway was a lot better off if we were stranded closer to the city.  Tactical decision making prevailed.

Nearly half way back down the high way we had burnt down to just above 1/4 tank.  It wasn’t looking too promising.  I had a bit of anxiety because I was the one actively watching the gas gauge sink lower and lower.  I putting slowly up the hills and coasted down with as little braking as possible.  Anything I could do short of start cutting weight, I did.  We continued to pass by the broken dreams of the places that we had hoped were open and glared for any signs of life or fuel that we could readily access.  There were neither.  The journey continued up and down the hills and around the icy curves, when upon cresting a hill we saw what was looking to be our demise.   There was a truck stopped in the road.  An oversized load forerunner with it’s operator standing in the middle of the road flagging us down with a stop sign.

At this point, if you can imagine the scene from “Christmas Story” where Ralphy spills all the nuts while changing the tire and in slow motion drops the F-bomb, that’s how I sounded.  We were low on gas, sitting here and waiting for who knows how long for this truck to safely make it by was only going to burn up what we had left.  As I came to a stop, in literally, the middle of no where, I casually rolled down the window to make contact with the fellow that was leisurely boasting the stop sign.  Figured I’d at least see how long he expected it would be and see if by chance he knew of a place that wasn’t on our map of lies that we might be able to snag some fuel from.  He looked like Jim Gaffigan, the actor/comedian, though slightly ill tempered, as if he really didn’t want to be standing out in -10 degree weather either.  He said they had a 19 foot wide load coming through and it’d be a couple minutes then we could be on our way.  As I spoke to him, I noticed one of those random farming fuel pumps you see in the back of full size trucks from time to time.  And it hit me, this might just be our chance.  So I asked him if he had any unleaded we could get off of him (didn’t take note to whether his truck was diesel or not, so I said unleaded to make sure).  Turns out luck was on our side in that moment.  Sort of.

His tank was full of unleaded, yes, but he would have to fill it back up in places where they charge ten a gallon for it, so that’s what it would cost us.  He really tried to not have to give us any, asking how bad off we were and all, but in the end, we were a half tank fuller and 40 bucks poorer.   It seemed greedy to my cohorts that he would charge that much for fuel to help someone in need out.  I was simply happy we got some gas and would surely make it back to town.  This guy, despite his gruff demeanor did help us out.  He could have been charitable and given it to us, but that might also be company fuel that he’s going to have to explain where it went.  Not my place to assess his high prices when we were in fact able to afford it.  Bringing up my point, carry cash when you’re in the middle of no where.  Shit happens.

We rolled back in to the city maybe two hours after that, welcomed home by the wives who had hung out all day and had prepared a wonderful taco dinner which was conveniently ready when we got there.  My daughter hung off of my the rest of the night like a monkey because she missed me so much and all was well with the world.